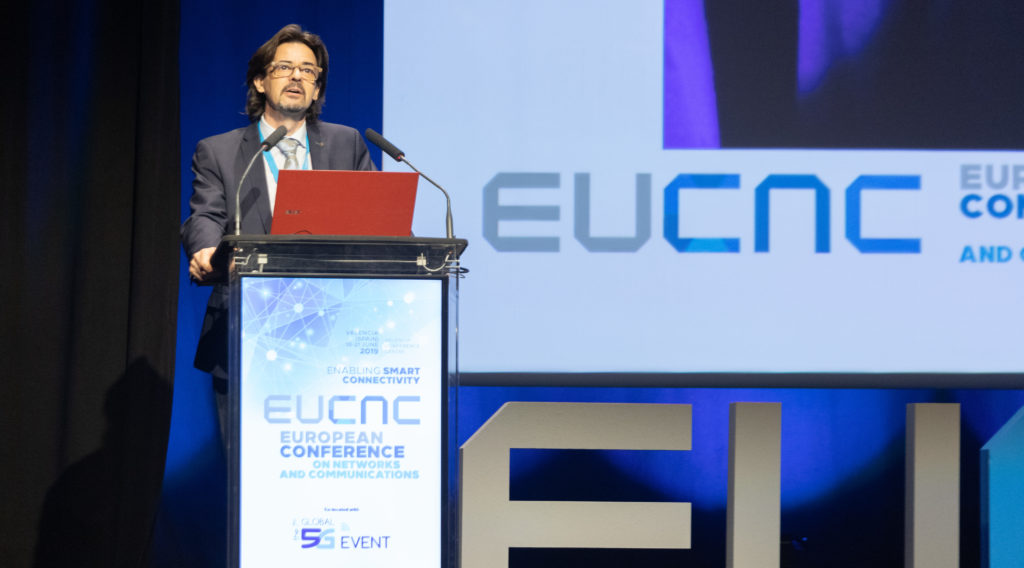 The Valencia Conference Centre gathered, last June from 17 to 21, more than 800 international experts to address the present and future of mobile telecommunications and the 5G technology industry, current focus for all eyes due to its role in the US-China commercial and digital battle.

The meeting hosted two of the most important events in the sector in the international area: the European Conference on Networks and Communications (EuCNC 2019) and the Global 5G Event, which allowed to discover the latest advances and developments in the field of 5G.

“It is a technology that is going to change the world and is already leading us towards the fourth industrial revolution”, says the director of the iTEAM Institute of the Universitat Politècnica de València (UPV) and president of the technical committee and organiser of the EuCNC 2019 and the Global 5G Event, Narcís Cardona. During the week, there were different demonstrations of practical applications and use cases of this technology, including the first global holographic videoconference 5G SA, a remote car driving system, an industrial robot controlled with 5G and an immersive reality cave. The world’s first live transmission was also carried out using a directly connected HD camera, thanks to the collaboration of RTVE and the UPV. All this was possible thanks to the independent technology 5G SA -Standalone, autonomous, totally independent of the 4G developed by the multinationals ZTE and Orange. All these applications were evaluated during the weeks prior to the event at the Universitat Politècnica de València, which has launched the first external 5G campus among Spanish universities.

In these tests, in addition to the institute iTEAM also participated the Institute ai2 (in cases of automobiles and remotely controlled robots) and the Institute I3B, which collaborated in the development of the cave of immersive reality.

There was also a demonstration of rapid deployment of 5G emergencies in La Marina de València: A helicopter, drones and ambulances connected to its network and coordinated with each other, allowed a rapid response to the simulated emergency situation. This demonstration was led by Nokia Bell Labs in Spain, and was developed in collaboration with the National Police, Hispasat, Cellnex, uTEK and ValenciaPort.

All this was possible thanks to the deployment of different 5G stations, which were distributed in different parts of the city, such as the Marina Real, the City of Arts and Sciences, the historic centre, the Valencia Conference Centre or the UPV campus itself.

The experts who participated in the meeting came from both the scientific community and the world’s leading telecommunications companies, which presented their newest products related to 5G technology. “Our purpose is to bring 5G technology closer to the public. We want you to see in the streets of our city what this technology consists of and which features it will be able to offer in our daily life”, explains Cardona.

The director of iTEAM UPV says that the 5G is the network of mobile networks, “an almost perfect technology, ultra-flexible, to which you can connect any type of future device.

To see everything that happened during the events Global 5G Event and EuCNC 2019 visit the official Youtube channel.