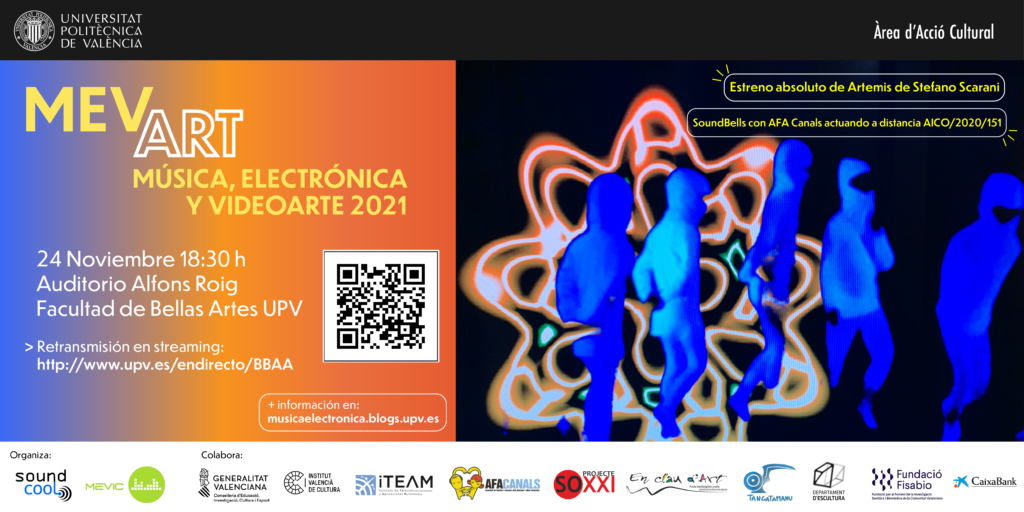 On November 24 at 18:30 at the Alfons Roig Auditorium of the School of Fine Arts of the Universitat Politècnica de València UPV (Building 3N top left. http://www.upv.es/plano/plano-2d-es.html) a concert will be performed where the Canals Association of Relatives and people with Alzheimer (Afa Canals) will participate creating video with Soundcool remotely for the piece SoundBells from Projecte SOXXI (streaming at http://www.upv.es/endirecto/BBAA)

All the information is in:

The work represents an interlacing of Nine Bells and Resonantia, with the visual contribution controlled remotely by AFA Canals users in real time using Soundcool. All this is part of the project New technologies for music and audiovisuals for the treatment of neurodegenerative diseases (AICO/2020/151). In this project researchers from the UPV and Fisabio test the use of Soundcool for cognitive stimulation of Alzheimer’s patients:

Soundcool, the collaborative sound and visual creation system with mobiles and tablets, devised by Jorge Sastre, professor and researcher at the Institute of Telecommunications and Multimedia Aplications of the UPV, could contribute to the cognitive stimulation of patients with Alzheimer’s and other neurodegenerative diseases. This is derived from a research project being carried out by Sastre and his team in collaboration with Dr. José Manuel Moltó, a researcher at the Fisabio Foundation and a neurologist at the Virgen de los Lirios Hospital in Alcoy. Funded by the Generalitat Valenciana, through the Counseling of Education, Culture and Sports, and by Polisabio (UPV-Fisabio Collaboration Program), its first results have been presented at the IX National Alzheimer’s Congress, held on November 11, 2021 in Vitoria-Gasteiz.

“These are preliminary but very promising results. We have completed the Phase 1 of validation of the system and it is a first step in our research project, focused on the use of new technologies as non-pharmacological therapy in neurodegenerative diseases ”, points out Jorge Sastre. According to the results obtained in the Association of Relatives and People with Alzheimer’s and other dementias AFA CANALS, Soundcool would help to increase the motivation and creativity of patients and would also enhance the interrelation between them.

Today, there are many apps to stimulate patients with this type of neuronal pathologies, such as Neuron UP (the most used and known), Smart Brain, Stimulus or Know Alzheimer, but none of them is collaborative, unlike Soundcool. The system that emerged from the UPV laboratories allows the creation of concerts and other collaborative activities with music, sound, image and video with tablets in a few seconds. It consists of a set of modules such as audio, image or video players, audio and video effects, chroma, video mixing, etc. that can be interconnected with each other, as if it were a “LEGO” for sound, music and image or video.

At the end of last October, the UPV team organized the participation of AFA CANALS in the visual creation of the final concert of the International Festival SOXXI 2021. In it, patients remotely controlled different elements from the center’s facilities, participating in the creation of the show.

“The collaborative activities carried out in AFA Canals throughout the tests stimulated the patients to help each other to carry them out, and to relate to each other once they were finished, which did not happen easily before starting them”, Begoña Faura, director of AFA Canals, highlights.

The UPV and FISABIO team continues with this line of research with the aim of corroborating these preliminary results, for which it will carry out new tests on the usefulness of this tool in different cognitive stimulation tasks.